Update on how I’m coping with my meds: I’ve spent all of the past fortnight essentially zonked-out. Lethargic, tired, but still not sleeping at night even with a bedtime dose of 100mg. I wake up often, as I always have, but I go back to sleep quickly and it doesn’t seem to be hypomania that’s waking me – like those hellish weeks before I started on medication. I get up late, dozing and snoozing. So I’m probably getting the hours (of sleep) I need, but it would be nice to sleep right through the night. Just once a decade would suit me!

The dreams are long, vivid, story-like. But not unpleasant and not particularly anxiety-driven. Strangely, most of them involve my childhood home. [There are PTSD issues related to that part of my life.]

It’s early days, but my hypomania appears to have been clipped, though there was a sudden episode last week that came right out of nowhere, very fast. And it went almost as swiftly, leaving me low. But nothing I couldn’t handle.

My anxiety level seems to have dropped a bit (something my psychiatrist noticed immediately at this morning’s appointment) but my OCD seems untouched by the meds. Although there was no reason it should do, I had nonetheless hoped it might help.

I haven’t driven my car since starting Quetiapine; I daren’t – I’m not too confident walking in a straight line at the moment, let alone having horse power at my command.

Psychiatrist this morning pointed out that the 150mg/day dose is too low to treat bipolar and has recommended 300mg XR a day, taken in one go at bedtime. I’ll start tonight. After 20 years of not sleeping through the night even once, let’s see if this does the trick!

My next appointment is in a month; I have the option to double this new dose to 600mg/day from then.

So, chapter 2 of this medication story starts tonight. Watch this space…

Quetiapine, the destroyer of days
the thief of moments the injector
of sleep-filled breath the cloud of
haze that surrounds me inside and

out. The amazement of me; how

did my life as such disappear?
Here and there, then and now,
the week is sucked into twilight
and I’m left to stare into darkness

at midday. Life saved but blighted. 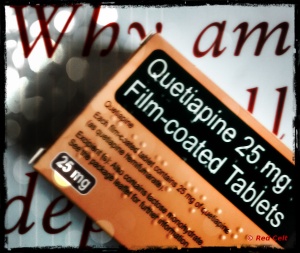 I’ve thought of that thing so very many times in my life it no longer has any meaning. It’s become the norm.

I was a teenager when I bought not one but two copies of Erwin Stengel’s book, read it cover to cover as if it was a talisman; informing and protecting me from its subject.

It means so little to me now it blurs with breathing, thinking, seeing. Believing. But most of all, knowing. A thousand thousand times.

I still don’t feel protected, however much I feel informed.

I spent the first couple of days inside a cloud. Just a normal kind of cloud; fluffy and light. Not a raincloud, but spoiling a potential blue sky nonetheless.

The first night, I slept quite well, though I didn’t sleep through the night. Well, I haven’t done that once in 20 years so it’s going to be a tough nut to crack. Dreams are vivid and story-like, not unpleasant or threatening. Mostly about people and places I’ve always known, with a sprinkle of absurdity.

Even after a few days I can feel the ounces and possibly lbs making themselves known to me. But here on Day 5 the light-headedness and general cloudiness has slackened a little,though with that – from Day 4 – the anxiety in particular has become more bold again and is peeping over the fence, trying to work its way back into the neighbourhood where it’ll sit on the front porch rattling the door handle, making a nuisance of itself.

I do feel already that my high and low moods have scrunched together a bit; the top and the bottom have been chipped off or squashed up towards the middle.

Ah, that sacred and mythical middle of 0 on the mood chart! Like the Grail, unattainable and tarnished but always worth a quest or two.

What Quetiapine hasn’t touched however is that dastardly OCD. It doesn’t seem to have made any impression on that yet. I realize it’s very early days but whereas I feel the meds might put up a good fight against Bipolar II as a whole, it’s quite evident that in OCD (and mine is mild) it’s met its match. Possibly ditto the insomnia, though time will tell with that.

My psychiatrist is looking to double the dose, so that’s something else to throw into the mix.

The worse thing to do is to look online for possible side effects. Yes, there are many. But they can’t apply to all users surely? There are millions of us out here! I’ve already noticed today as I begin to get accustomed to the drug and exist in slightly less of a cloud (say, cirrus as opposed to cumulus), that I have some slight shaking in my hands. And joint pain, which I used to get all the time, particularly after a bout of swine flu but which had all but disappeared on a day-to-day basis. Elbows, finger joints now. Some low-grade headaches in the afternoon, nothing I can’t handle.

It’s difficult to find the motivation to exercise when you’re in a cloud. I walked 3-4 miles yesterday, a couple of miles the day before. I wouldn’t cycle at the moment any more than I’d attempt to drive. That would be dangerous; cloudiness, greatly impaired reaction times. And I stare at the exercise bike with every intention of doing 20 mins on it, but… meh.

So it’s ‘keep on keeping on’ at the moment, ‘going with the flow’, and several other metaphors and trite motivational phrases.

After 35 years of ‘mood lability’ (aka bipolar II) and a worsening condition which leaves me 6 weeks into a hypomanic / mixed episode as opposed to my history of ultra rapid cycling, I have meds. For the first time ever. Not including anti-depressants, which always made things worse of course.

Saw psych this morning, starting on 150mg Quetiapine a day from today.

You think the worst night of your
life was bad you’ll possibly get through
this one I’m not certain I will.

all might be your own black soul
smudging your present existence. All
the dread and the shredding of spirit

has come down upon me now. And
not for the first time. We grasp at
something we have given trust to;

the thing we inscribe with the words
of our being. The magic words, the
first words we heard. The last words.

I find myself in the bizarre position of trying to make myself depressed. This 5-week hypomania w/ occasional mixed state is going to be the death of me at this rate, and I’m not exaggerating. I’ve had enough of it; it’s evil. I’m taking it personally: it hates me.

So, I’m trying to make myself depressed – a state of being I’m much more self-aware in. I’m not suicidal when I’m depressed; just when I’m hypomanically mixed.

What could possibly go wrong?