This October has marked one year since I began taking Quetiapine (Seroquel) and yesterday my son told me I am very much better (“nicer”) than I was thirteen months+ ago. Personally, I can’t see it, though I’m aware that the meds have worked their virtual miracle on my out of control, life-long bipolar symptoms. I have no reference point to ‘getting well’ as I’ve never been well.

Although I only sought medical and psychiatric help two years ago, at the age of 54, I can recall mood swings and what I now assume were brief psychotic episodes back to the age of four. So then, a half century of bipolar and depression, untreated and ignored by those who knew me. Who know me.

Having had eight months off from my stressful job last year, I have managed to stick at it for a couple of months now without missing a single day. I’m stubborn; I won’t let bipolar dictate its terms to me anymore. I must have always been stubborn, otherwise I’d have sought help before now. Actually, as you’ll know if you’ve been reading this sporadic blog (sorry), I did present myself to my GP when I was 20 with severe depression. He told me: “Pull yourself together” and sent me away without help. I was so embarrassed I waited almost a quarter of a century before handing my current GP a letter detailing my illness.

I know exactly when the light bulb above my head lit up regarding bipolar. I’d tried several different anti-depressants over the years for reactive depression: divorces, deaths in the family. That kind of thing. But these meds had made me ill; none of them worked. Then I read a book called ‘Why Am I Still Depressed?’ and it all made sense.

Which brings me to October 2016 and twelve months of Quetiapine (and at some point the addition of fluoxetine). The Q dose crept up and I now take between 500-550mg a day in three or four doses; the days I’m in work I take that extra 50mg for anxiety.

The biggest issue for me has been the Fat or Mad? decision. It became apparent early on that I had to make a choice, and I chose not to be mad. So in a year I’ve gained over a stone in weight and my general fitness has suffered greatly. No-one talks about the physiological symptoms of bipolar, but they’re very much there. I’m sedated half the day and I ache like hell from tip to toe.

I still don’t sleep through the night, not by a long way. I wake every hour or so then fall asleep again quickly. My anxiety level is still higher than I expected it to be by now, and my mild OCD with it. The meds haven’t really touched the OCD at all. Neither did the nine months of CBT I received last year before starting meds.

I look back on hypomanic and manic phases with more embarrassment and utter bewilderment. How on Earth was that person me? A stupid question as I have no idea what or who me is.

Some things disturb me more than others now. About the illness, I mean. The dissociation is scary and confusing. I tried to get help for that during my therapy but after dragging this issue out from the depths of me, it was then left unaddressed. Yes, the dissociation disturbs me; I don’t like it at all.

The meds have lessened the occurrences of ‘extremely intrusive suicidal ideation’. It’s clipped the top off the highs and the bottom off the lows. I’m more stable. The fact that I’m compliant – both with taking my meds and attending my psychiatrist appointments – shows that I’m in a better place than I was. Not a good place, just a better place.

There was a discussion on Sky News this morning, which can be summed up in this subtitled image: 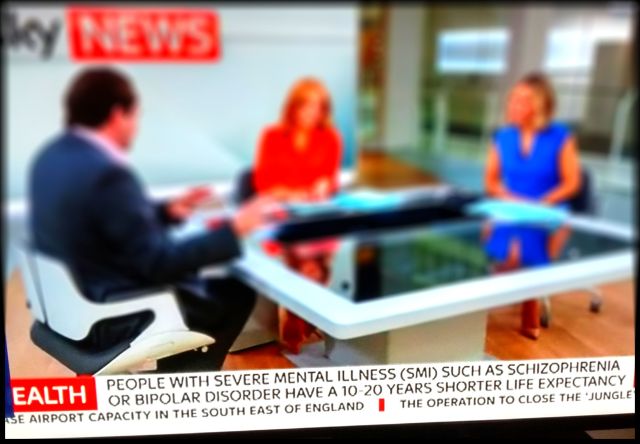 O yeah, I forgot to mention.. It appears I also have a dissociative (depersonalization) disorder to accompany my bipolar / anxiety / OCD. If I was a horse they’d shoot me.

Psychiatrist: “I can assure you you ARE real.”
Me: “I have a degree in philosophy, would you like to argue that?”